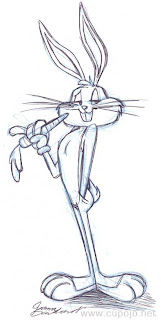 TCM, as I've oft stated before, is far and away my favorite channel. If I couldn't watch TCM, I think my soul would die a little. Its the epitome of television excellence, and it couldn't possibly get better. Except that it just did.

Tomorrow Tuesday March 24 at 8:00 pm, TCM will be airing a new documentary on Chuck Jones, followed by a mini-marathon of his cartoons. Its so pleasant to know that the programmers at TCM take these classic cartoons seriously enough to broadcast them on such a prestigious network. Plus, I have this eerie feeling that the TCM programmers have telepathic link to my brain. Be it "The Red Shoes", "Seven Brides for Seven Brothers", or a hefty helping of Chuck Jones, their programming always feels like a special personal gift to me. I'm positively giddy. Anyhow, make sure to watch TCM tomorrow!

(I tried to draw the Chuck Jones version of Bugs Bunny, which I've always liked. Chuck Jones's Bugs is so much different than the other directors' versions. I like the quiet self-confidence the Jones Bugs has, and that amused grin which hardly ever borders on smugness. Also, Jones seemed to like giving Bugs pockets, even though he has no pants. Its a little disturbing if you think that Bugs is tucking his hands underneath his own skin, but I like the attitude it gives him so I don't mind. If its good enough for Chuck, its good enough for me.)
Posted by Joanna Davidovich at 10:52 PM 1 comment: 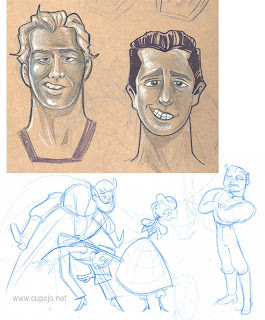 Posted by Joanna Davidovich at 10:13 PM No comments: 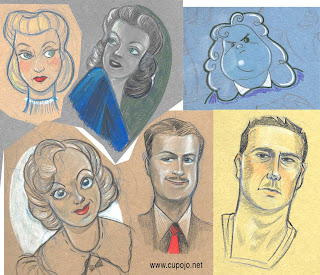 I felt like trying out some faces in the ol' crapbook today.
Posted by Joanna Davidovich at 11:31 PM No comments:

Ok, as its been a few months since Electric Company premiered, I figure its safe to do one post about the development of the spots. The direction I was given was a video clip of another gorilla cartoon and a wish that these spots "look like nothing else on television". Needless to say, there was a lot of back and forth with the designs and the trimming down the spots to stationary one-shots. But overall it was a fantastic experience- I hope I can work with Sesame again.

Here's the original idea I worked from work from: 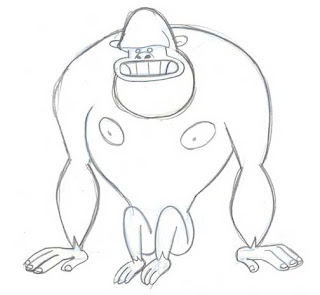 And here are some sketches and color tests (I am rather partial to the wooden-looking ape at the bottom): 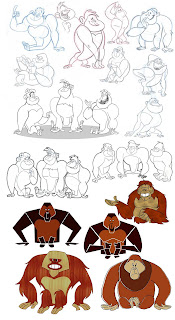 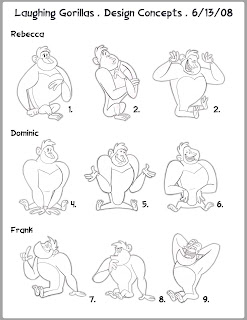 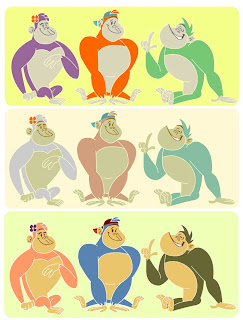 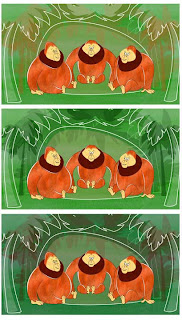 And here's the original storyboard for -INK:

And here's the animatic (with most of the close-ups trimmed out):


And here's the final spot! 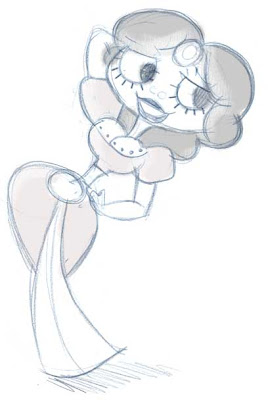 ASIFA Atlanta hosted a screening of Nina Paley's "Sita Sings The Blues" tonight and it was wonderful! The fact that this film was created by one woman in just a few years is almost alarming. (Its lit a firecracker under my ass- I can tell ya that much...) Kudos to Nina Paley, and to anyone who has the chance to see it, SEE IT.
Posted by Joanna Davidovich at 1:34 AM 2 comments:


Well, its done! I spent twice as long processing as I spent on the actual animation, nor am I entirely pleased with the look of it, so I'll have to rethink my method. But thats what this experiment was for- explore some techniques and have a little fun. I do like this little character, in any case. I hope you do as well- enjoy! (BTW- the music is a snippet from the Asylum Street Spankers "Drunkard's Wave)
Posted by Joanna Davidovich at 2:30 PM 1 comment:


I've taken a break from the music video for a short spell to enter an animation contest of Frederator. Its just a little short something I can poop out while I chip away at the more complicated and involved music video. It helps me stay motivated. So here's my pencil test of a drunk teddy bear! You might recognize him from the crapbook sheets below. Bear in mind (tee hee) that this isn't my final entry- its just the pencils. I do plan to color it and add some explanation. (And yes, I know its longer than 2 seconds, but since I'm doing this for my own pleasure I didn't want to limit myself. Plus, I couldn't find any specific rule disqualifying entries longer than 2 seconds, oddly enough.)
Posted by Joanna Davidovich at 7:55 PM 1 comment: