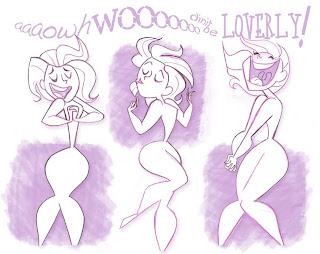 Most other animators I know say they love what they do because its like acting without having to get up in front of anybody. I guess I'm the odd duck, because I like acting because its just like animation, except without all the fuss of drawing. Its just so immediate, and so much fun! That why every so often I get the bug and decide to audition for a local play or musical. I never get in, but I won't forgive myself if I don't try. Today I went to an audition for "Sweeney Todd", a musical I adore for reasons I've already written about in this blog. I think I did all right- it wasn't near the fiasco of my last attempt at an audition (someday I'll tell that tale, but its too soon for me to relive that event without fainting from humiliation). Anyhow, he's what I imagine I looked like today, singing my audition selection.
Posted by Joanna Davidovich at 10:45 PM