Everything About The Lego Movie Is Awesome!!! 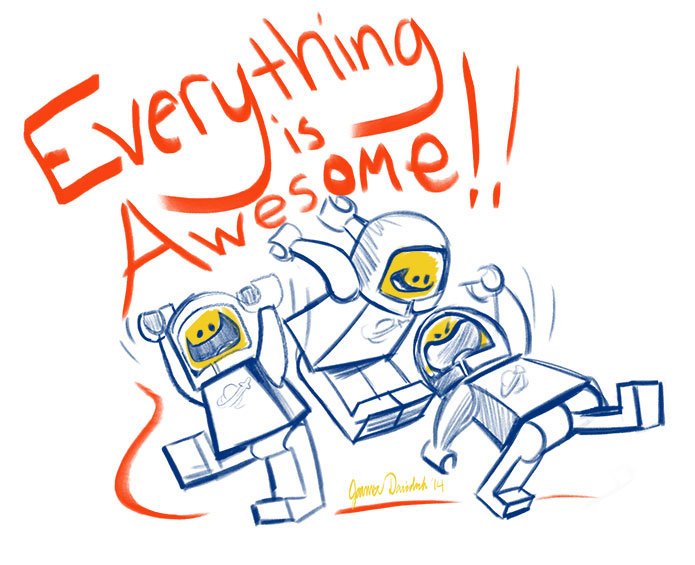 Could I boast for a moment?  Its no big thing to claim that "Lego Movie" is ultra-super-mega-uber-hotdog-awesome, but I'd like to lay down that I knew it was going to so be from the get-go.  While skeptical friends rolled their eyes at the previews, I'd grab them by the collar and slam them against the wall and opine thusly: "You don't understand!  You all don't understand!  Its going to be awesome!" Because Phil Lord and Chris Miller, more than anyone else I can think of, have just about the keenest wit and understanding of what makes animation fun these days.  Their MTV cult classic "Clone High" is just about the funniest television I've ever seen, so dense with jokes it takes multiple viewings just to catch everything.  That Lord and Miller were able to retain that weird, lateral humor into family friendly-fare like "Lego Movie" and both of the Cloudy movies is hugely commendable.  But what I love does not end with the writing- and thats why I love these properties so much.  The animation is fun.  I mean with the deep sense of gravitas- it is so important to me for animation to be FUN.  Fun in the way I thought it was fun when I was a kid.  And fun animation is a theme with these guys.  "Clone High" is very limited animation, but so expertly timed and posed and I could, and often do, watch it on a loop.  And that precision and economy of movement was still apparent in the bigger-budget fare of "Cloudy With A Chance of Meatballs, while being augmented by the wild, floppy, Muppety bursts of motion that distinguishes Cloudy from everything else out there.  You know those animators were encouraged to experiment, push extremes, create their own physics, and generally have a blast with those digital puppets.  "Lego Movie" is the same, and the broad, sharp acting works in concert with its weird, yet very thoughtful story that caught me off-guard.   I applaud Phil Lord and Chris Miller and everybody on the crew for understanding that fun animation is as important as funny jokes and a engaging story.  "Lego Movie" has everything right.  Everything about it is awesome.

Posted by jothezette at 1:36 AM