I Hate Tim Burton, and So Can You! 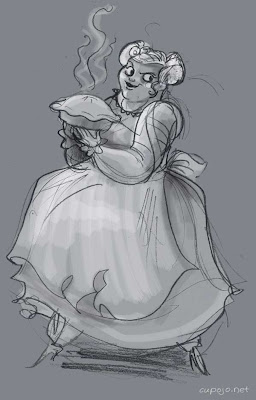 Thats right, in just a few simple minutes, you too can hate Tim Burton! "But no, " you might say. "Tim Burton is an eccentric, grimly humorous genius who's taken black and white stripes to the heights of cinematic excellence!". Well, as "Nightmare Before Christmas" and "Beetlejuice" are high on my list of favorite films, I used to think that as well. And then I saw "Sweeney Todd" and after fifteen minutes I hated Tim Burton. Granted, Burton's been making some klunkers, but they never really offended me too deeply. "Sleepy Hollow" was vaguely amusing but nothing special, "Corpse Bride" was a visual delight but defeated itself in its own storytelling, and the completely unwarranted remakes of "Planet of the Apes" and "Charlie and the Chocolate Factory" just confused me. But Sweeney...oh..... *SWEENEY*. This is personal.

Musicals are like playing Russian Roulette with entertainment. They can be the joyful and wonderful and top-tappingly brilliant, but if you're unlucky in the spin, they will make you want to blow your brains out. Most modern-day musicals make me want to blow my brains out. But "Sweeney Todd" was an shining exception. I was mildly obsessed with it in the few weeks after I discovered it- listening to the CD over and over. I fantasized that someday I would make an animated version of it. It is, at its core, a comedy. But it is a dark, twisted, grotesque comedy. The conceit of a barber murdering his customers and then baking them into pies is ludicrous and horrible..and funny! ...And horrible. But still funny! Slap some hauntingly lovely and devilishly funny songs on top and ya got "Sweeney Todd".

Now imagine all the humor sucked out of it. Then stick in some Tim Burton pets like, oh...say... Johnny Depp and Helena Bonham Carter who apparently have never *seen* a musical let alone perform one. Make sure they don't show any emotions other than consternation or boredom. Don't time any action or edits to the rhythm of the music. Make sure Carter's inflate-a-boob cleavage is in every shot. Add some absurdly gorey blood spatter. Oh, and black and white stripes. Gotta have the stripes. After you mish-mash all this together, you're left with a boring, dreary, predictable, dischordant, heartless waste of two hours and ten dollars. The story of Sweeney Todd is wickedly entertaining, but if this movie is your introduction to it, it'll leave a worse taste in your mouth than Mrs. Lovett's meat pies.

I urge you and everyone on your street to rent the filmed stage production of "Sweeney Todd" with Angela Lansbury. Without the use of elaborate sets or scenery or digital fudgery, that filmed stage play has ten times the believability and skin-crawling fun than this insulting film. The performances are powerful, and Lansbury is so delightful you almost forgive her cannibalism. Rent it if only to compare the "Have A Little Priest" number. In the musical, this song is exuberant and riotously funny. In the movie, Depp and Carter successfully dodge every emotional cue and garble their enunciation so that only the audience members who happen to have memorized the libretto could understand the lyrics. RAWR! I'm mad. 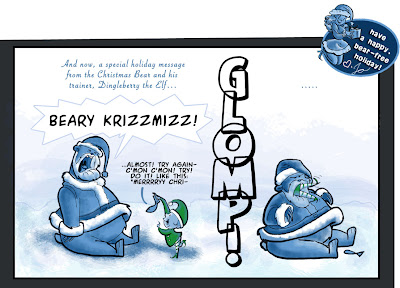 My traditional last-minute holiday card! Enjoy!
Also, I'm working on a really fun project for a friend right now, so thats why I haven't been updating every twenty seconds like I normally do. The project is looking pretty good, and I can't wait to share it! It will be done in early January, so stay tuned.
Posted by Joanna Davidovich at 12:49 PM 1 comment: 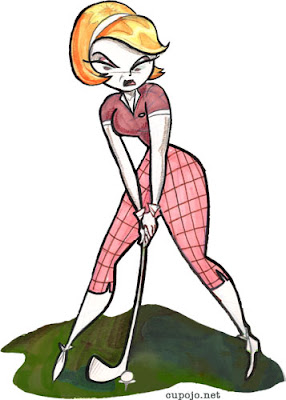 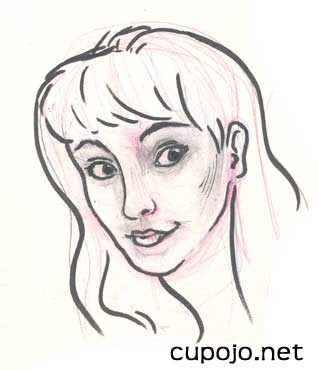 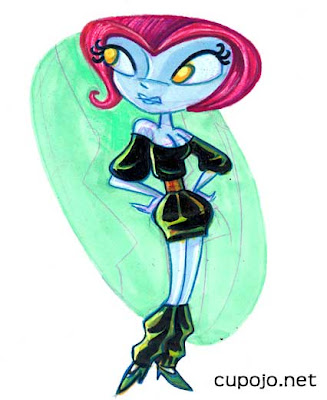 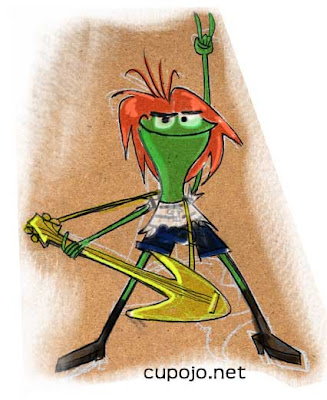 Just adding a couple doodles. I think its an admirable exercise to daily post one's best drawing from the day- even if said drawings are stinky. Keeps one motivated, you know. ...Scone?
Posted by Joanna Davidovich at 2:21 AM No comments: 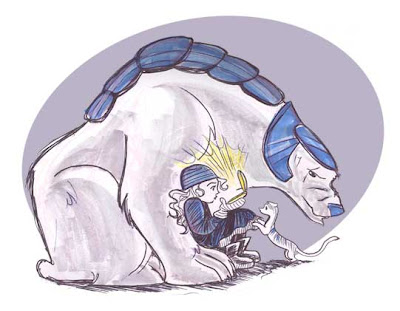 I lust after dark, adult fairy tales. I've devoured all the original Grimms' fairy tales. I reveled in every second of "Pan's Labyrinth"... And "His Dark Materials" is one of those works that seems to have been written just for me. The first time I read them, I was shocked that this stuff was marketed as children's books. How did these stories of abstraction, violence, and thinly-veiled sexuality get published as children's books? No doubt "His Dark Materials" is a thrilling and challenging story, but calling it a "children's series" seems inappropriate. Not that I mean that children should be kept from reading it- thats nonsense. But these books are no more "kid lit" than "Ender's Game" is "kid lit". They're not "for children"; they for anybody with a love of fantasy and an inquiring mind. Or... they were written just for me. Yeah...thats probably it.

With that said, I went into the movie with the highest of hopes. And I'm very pleased to report that I was not disappointed. The casting is flawless. The girl playing Lyra isn't just some absurdly-pretty little girl like in "Bridge to Tarabithia". The movie Lyra exudes defiance, independence, and curiosity- just the way she should. Mrs. Coulter isn't missing an ounce if deadly glamour. And Daniel Craig adds a touch of much-needed warmth to the character of Lord Asriel. All of the daemons are simply thrilling to watch. Pan's morphs are seamless (his feild mouse is my favorite form) and the golden monkey holds the balance of beauty and hideousness- just how he's described in the books. And the power of Ian MacKellan's voice as Iurik is astounding- is he really in his eighties??

The screenplay is adapted quite well, although some of the most emotionally impactful parts of the books were muffled or left out. I don't think the movie makes clear how painful and deadly it is to be separated from your daemon, and how repulsive and horrifying it is to see someone without a daemon. The book says its like seeing someone without a head. In the movie, Ma Costa should have been appalled when she saw her poor, mutilated son. She certainly should have held him as she did in the film, but only after mastering her shock. But maybe scenes like that would have a PG-13 consequence. As for all the religious themes, its sadly toned down for the movie, but there are a few choice lines that made me grin. Apart from a few jump cuts worthy of "Order of The Phoenix" and a lot of redundant exposition (not one mention of the word "alethiometer" went by without a qualifying "aka: the golden compass")- this movie left such an impact on me I had to ramble on about it a bit. I didn't even hate "Beowulf" enough to write about it, and boy, I HATED Beowulf.

All in all, go see "The Golden Compass"!
Posted by Joanna Davidovich at 1:22 PM 2 comments: 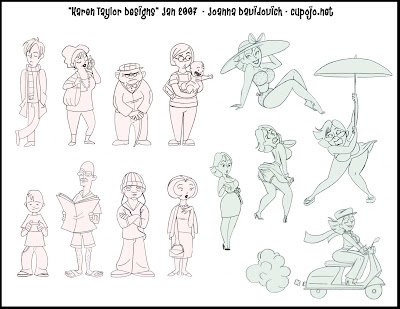 Not exactly portfolio quality execution, but I wanted to organize the Karen Taylor stuff as best as I could for now.
Posted by Joanna Davidovich at 5:30 PM 2 comments:

As you can probably see from the look of my blog, something's different'!  I've been unhappy with my website for a few years now, revamping the look and the structure every six months or so, seething with envy at sites I admired, struggling with IE to show transparent PNGs, ...but thats all over now.  Something clicked- and 48 hours glued to the computer got me a pretty new website!  Its very pink, and very girlie, but I'm at peace with that.  I'm very happy with the new look for once, so if you don't like it, please keep it to yourself for at least a few days.  Good night everybody!
Posted by Joanna Davidovich at 11:04 PM No comments:

I am in the process of changing my host, and its a real pain in the butt. So if my site is down for a few hours/days/eons, I apologize!
Posted by Joanna Davidovich at 6:01 PM No comments: