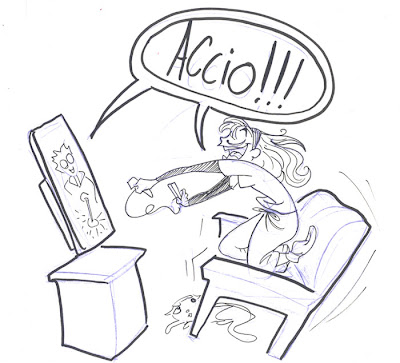 I'm a dork and I'm not ashamed.

I love Harry Potter. I've read all the books, natch. I've gleefully listened to the Jim Dale's delightful readings of the audiobooks about a dozen times each. The movies...well, I've seen them. Some more than others. But the point is, I like Harry Potter.

I don't like video games that much though. They're ok, but I normally can do without. But I've just begun playing "Order of the Phoenix" on the Wii, and I'm shocked by how much I'm enjoying it. I've been playing it for hours, and I've yet to get bored with making objects whiz across the screen with a flick of my Wiimote. Granted, everything else about the game sucks. The storytelling, the rendering, the character "animation"...its all you'd except from EA. And yet, any time I shout "Wingardium Leviosa!" (and yes, I do shout it... that helps somehow) and make a stone bench fly across the courtyard and beam Hermione in the face, it makes up for everything! So what with being back at Primal for a spell (heh heh) and discovering I can be way nerdier than heretofore dreamed, I've not been drawing much. But I have been having a good time at least.
Posted by Joanna Davidovich at 11:04 PM No comments:

By labeling some posts "Daily"- I was trying to motivate myself to post at least one drawing a day. That...has not happened. Maybe I should take a cue from Jon Stewart and just call it "A" Daily drawing to take the pressure off. I've been working on some projects these past few weeks that have demanded my easily-waylaid attention. These projects may or may not include a) an animated title for a live-action MTV show b) an orange bird hawking chocolaty cereal and c) a huge smlling dilly-dong.

In the meantime, have a crappy old doodle!

Posted by Joanna Davidovich at 11:03 PM No comments: