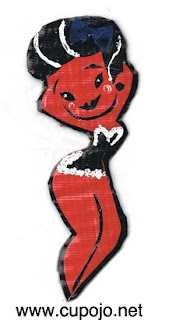 Took a break from figuring out ToonBoom to use up some more duct tape on a free art drop. Follow @jothezette on Sunday to find out where she drops, and #one4theshow to find all sorts of cool free art hidden around town. Very soon now, I swear I'll give up these office supplies. I don't know why they have such a hold on me.
Posted by Joanna Davidovich at 4:28 PM No comments:

Decided to take the afternoon off and make some free art out of old office supplies. Here I tried my hand at some more Mimis. While I don't think I'll make a habit if this, plastic divider sheets are much easier to work with than styrofoam. Follow @jothezette or @FAFATL to be notified when I drop these.
Posted by Joanna Davidovich at 7:10 PM No comments:

What what what? The pencil animation for "Monkey Rag" is done? Well feed me nails and call me Rusty if it ain't so! At times I never thought I would make it this far, so even though its taken years, I guess I arrived here sooner than I expected. Inking starts tomorrow, but first, bedtime.
Posted by Joanna Davidovich at 11:47 PM 11 comments:

Brave: The Bear and the Bow 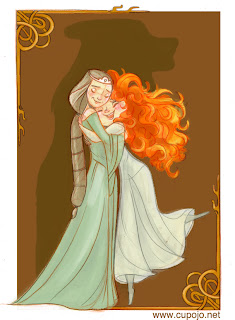 The trailer for "Brave" scared me.  While undeniably gorgeous, the warrior-princess-hear-me-roar trope was alarming.  Yes, the strong-willed, independent princess who wants to prove that a princess can fight even though she's a girl is ubiquitous in 90s films and tv shows like "Quest for Camelot", "A Kid in King Arthur's Court", and that one episode of the Gummi Bears... Suffice to say, usually the introduction of this theme does not bode well for a story.  But I have learned to trust Pixar over the years, and I was anxious to see what they'd do with this.

Yesterday I saw "Brave", and I was very pleasantly surprised.  There was the scene from the trailer where Merida cries "I'll be shootin' for my own hand" and blasts away the competition, but it is not in the least annoying or unbelievable like other depictions of the warrior-princess.  In fact, I really liked her and immediately believed that she could exist in that world.  And what I really loved is that this theme is not what the film is about.  Merida is established as a capable, independent heroine in the beginning.  The story is not a tedious chronicling of how she came to "discover herself."  The real story completely surprised me and I loved the unexpected direction.  I have read many negative reviews complaining about the story of "Brave", and this is something I am willing to argue about.  This story of the bond between mother and daughter is very satisfying, believable, and sympathetic.  Queen Elinor is a brilliant character, and captures a dignity, strength, and beauty that is lacking in most live-action actresses.  I loved watching the relationship between Merida and Elinor grow and evolve, and afterwards I *really* wanted to give my mom a big hug.  Not to make "Brave" sound like a chick flick- there's was a great deal more to enjoy in it, but the mother-daughter story is what stuck with me afterwards.

The tone of the film is definitely "fairy tale", but not at all Disney.  I've devoured much fairy tale literature, and what you realize about those stories is that they are very rarely epic on scope.  Disney turned little five minute tales into veritable operas of sweeping emotion and spectacle, and while I do love that, that is not what fairy tales really are.  "Brave" is not a Disney-esque epic, and I actually prefer the film's previous title "The Bear and the Bow" because it better suits the feel of the movie.  The world of the film feel so very real and tangible.  It seems like an honest, if kid-friendly, depiction of life in the middle ages.  There is very little finery about the castle, everything is lit by fire, and the royals are respected, but not grovelled to.  I do wonder if the film could have been made a little more serious, have more violence to increase the tension and heighten the stakes.  But then, that would probably make it an entirely different movie.  I'll just save all my bloodlust for my own fairy tale film.  "Brave" is definitely a winning film, and while it doesn't knock "The Incredibles" out of my number one spot for Pixar films, I look forward to rewatching it again and again.
Posted by Joanna Davidovich at 7:59 PM 1 comment: 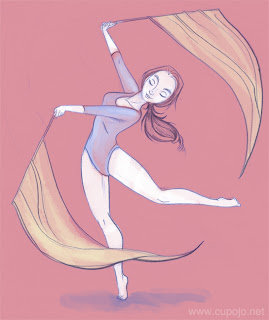 My mother's birthday was about 10 minutes ago, but I hope she doesn't mind... :)  I wanted to draw something special for her, but for some reason when I set out to draw something good it never turns out that way.  This sketch is based on a beautiful photo of my mother as a young girl performing rhythmic gymnastics back in the Soviet Union.  Its really amazing- you think you know your parent, and then they start a blog and you realize there are dozens of stories you never knew, even important ones of how the family came to be in America.  Every entry makes me tear up.  So Happy Birthday Mom- I am so lucky to have such an amazing mother. 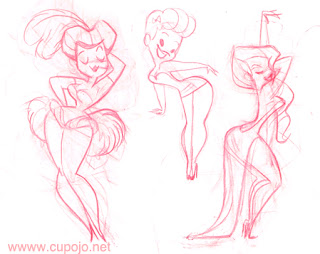 Thanks to a new technique the hubby suggested, I think this upcoming Free Art Friday will be a successful experiment.  Keep a look-out for these pin-up girls in the coming weeks.

Posted by Joanna Davidovich at 6:56 PM No comments: 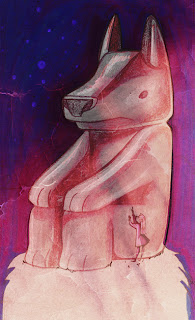 "Idol of the Lucky Dog"
Posted by Joanna Davidovich at 2:17 PM No comments: 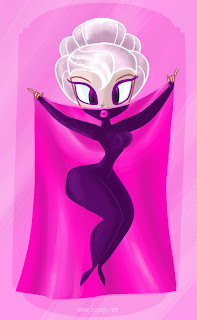 Has it really been more than two days since I posted a girlie drawing?  I must be slipping.

Posted by Joanna Davidovich at 1:38 PM No comments: 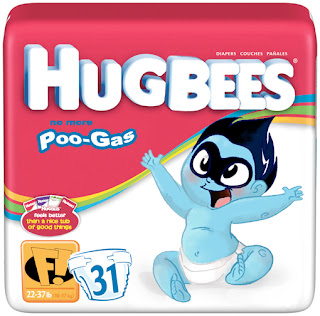 Every time I pass the diaper aisle in the grocery store, this is what pops into my head.

Posted by Joanna Davidovich at 3:27 PM No comments:

Daily Crapbook: Do I Prefer Work On-site or at Home? 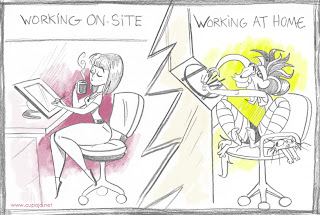 Every job is different when you're a freelancer.  Sometimes you work on-site, sometimes at home.  I couldn't say which I really prefer, although truth be told, I do tend to "devolve" if I'm at home for too long a stretch... 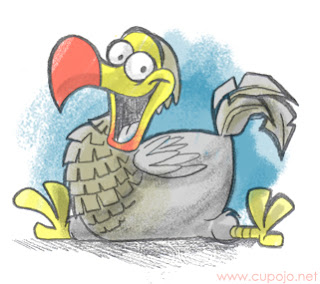 I don't know what it is about British humor, but it just sends me.  And Aardman Animation's sense of humor might as well be in the Tower on London along with England's other national treasures.  In an unusual twist of fate, I saw two movies in the proper theater this month.  One was achingly disappointing, and the other was Pirates: Band of Misfits.  This film is so dense with humor, I was laughing the whole way through.  Just the wide-eyed expression and wide-mouthed overbite of character was enough to elicit a giggle, let the alone the countless visual gags, clever wordplay, background jokes, and a distinctly British way of saying things.  Reading some reviews, I see that few critics can resist incorporating the language of the film in their analyses (hence the constant use of the word "luxuriant.")  I won't even comment of the technical achievements as I don't want to write an essay right now.  This film deserves to be a success, and I hope it justifies more stop-motion pictures from Aardman.  I may be over-enthusiastic as just looking at stills of these characters is enough to make me smile, but I still encourage everyone to go see it while they still can.
Posted by Joanna Davidovich at 1:06 PM No comments: 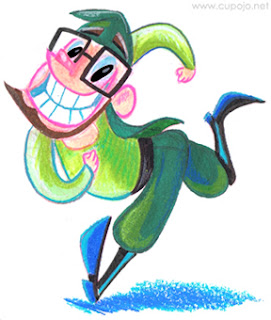 A quick doodle for my friend John's birthday.

Posted by Joanna Davidovich at 8:18 PM No comments: 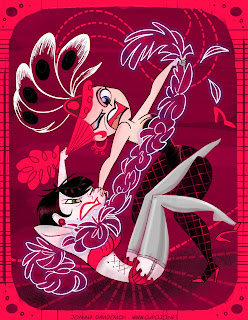 "That's My Boa, Betch!", an illustration for PinCurl Magazine

Posted by Joanna Davidovich at 1:17 PM No comments: 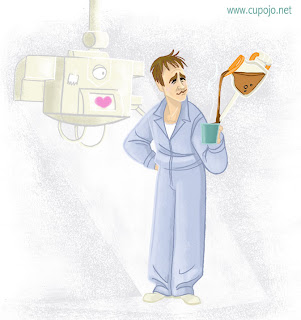 Again, I hesitate to call myself a sci fi fan, because I don't really like Star Wars or Star Trek.  That fact itself almost casts me out of nerd-dom entirely.  But when I come across science fiction that I like, I really like it.  I've mentioned X Minus One and Twilight Zone and such similar things before.  The Aliens films I only saw at my husband's insistence, but I liked them well enough.  Horror in any form is difficult for me to watch, but the Alien universe had enough legitimate tension, suspense, and interesting characters to be enjoyable despite the gore.  After watching the preview for Prometheus (and getting over my immediate disappointment that it wasn't about the Greek Titan) I got interested in what seemed a moody, atmospheric science fiction experience.  So in one of my rare semi-annual trips to a proper cineplex, I consented to see Prometheus.  ...And I didn't like it.  In fact, I didn't like it so much that I didn't even want to make a drawing making fun of it.  While I was mulling over my disappoint, my mind wandered to an example of science fiction that really encapsulates everything I enjoy about the genre- the film Moon.  Ah, Moon.  What an excellent little film.  What Moon did right is exactly what Prometheus did wrong: having believable characters acting intelligently within a story that presents profound questions, and and explores those questions through the narrative.  And because Moon did that so brilliantly, I decided to draw Sam Rockwell instead.
Posted by Joanna Davidovich at 1:22 AM 5 comments:

Just another doodle before bedtime.

Posted by Joanna Davidovich at 12:58 AM No comments:

Another day, another doodle.

Posted by Joanna Davidovich at 1:09 AM No comments:

An elaboration of one of the Free Art Friday doodles that didn't take off.  I may or may not have been listening to Mephiskapheles's "Bumble Bee Tuna" song at the time.

Posted by Joanna Davidovich at 2:36 PM No comments: 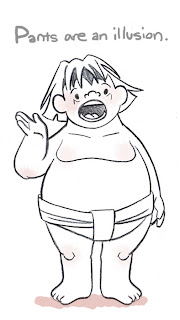 Just rewatched some episodes of Avatar, and I decided my favorite line comes from a very minor character called Hugh.  "Pants are an illlusion, just like death."  I don't know why it tickles me so.

Posted by Joanna Davidovich at 10:31 PM No comments:

A Sketch for Ray Bradbury 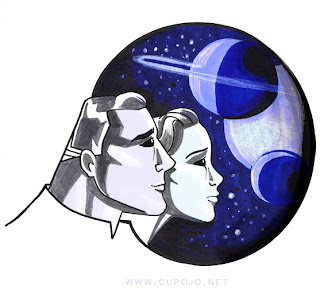 I just heard that Ray Bradbury passed away.  And I'm still in the middle of The Illustrated Man.  Bradbury is one of my favorite storytellers, weaving stories of a future that is simultaneously beautiful and bleak, and sometimes wryly hilarious. And sometime his stories simply chill you to the bone.  I only have to think of the title of "There Will Come Soft Rains" and my throat tightens.   Bradbury was brilliant; I wish I had started reading his work years ago.


Posted by Joanna Davidovich at 11:16 PM No comments: 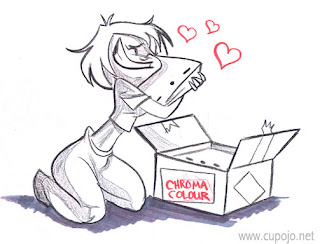 Just received my latest order of lovely, creamy Chromacolour animation bond.  So expensive, but I am addicted to the quality. 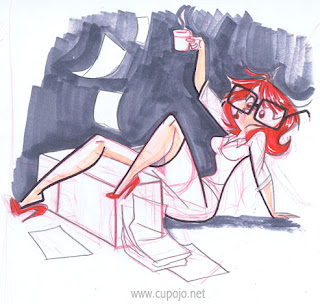 An old sketch from the crapbook for today.

Just experimenting with animating in an 8-bit style.  Kinda fun!

Posted by Joanna Davidovich at 11:35 PM No comments: 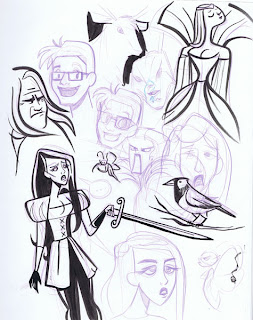 Can't seem to doodle anything worth finishing today.  But as I saw "Snow White and the Huntsman" yesterday, its at least fun to attempt capturing Kristin Stewart's vapid expressionless face. 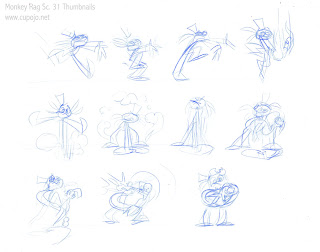 So today I begin work on the final pencils for Monkey Rag!  A short little scene, but still has a bit of action so I need to plan it out properly.  I also have some work to do for my buddy Zoran of LowCarbComedy.com.  Also have to leave the house at some point today to drop off some crappy Free Art I made in a tizzy last night.  You know, sometimes I'm relieved to go back to paid work just because its a legitimate break from my free time work.
Posted by Joanna Davidovich at 12:46 PM No comments: