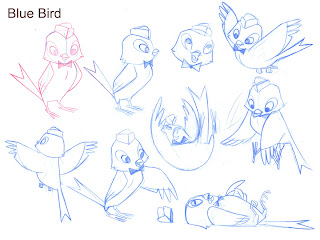 Once I get clearance to post the spot, I want to talk at length about this project. But for now, here's a BlueBird!
Posted by Joanna Davidovich at 11:26 PM 1 comment: 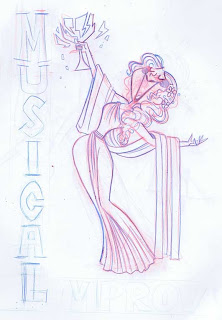 A sketch I meant to finish tonight, but...meh!
Posted by Joanna Davidovich at 12:17 AM No comments:

Over the summer, I contributed a little bit of Flash work to an iPad app called "LightBoard." Its simple animation- so simple that I hardly want to spend the time making a demo of it, but I wanted to at least mention it. Also, I got to do voices for a couple of the characters which thrilled the bajeezus out of me. (I'm Fishy!) The app has gotten some great reviews, check it out! 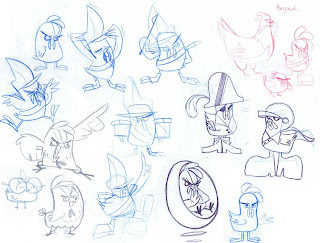 Over the fall, I was at Primal designing some characters for a project called (COUGHcoughgrumblejibblyCOUGH). The villian was supposed to be a tiny evil despotic chicken. Eventually, the character got scrapped, but I did save some of my sketches.
Posted by Joanna Davidovich at 11:42 PM 1 comment:


This is the job that occupied most of my summer- a spot at Artifact Design called "Drawn Together" for Cartoon Network Latin America's version of Boomerang called Tooncast. It was a daunting project because of the the scope and the process. Its a very long spot, there are hordes or characters, and animating directly in Photoshop was something I had never done before. And of course, the turn-around was tight. There are lots of things I wish I could change. For instance, I way overanimated Porky and Shaggy in the beginning. They ended up so small in the scene, and the camera pans by them so fast, they could have literally been a still. My worst idea was an attempt to animate Batman and Robin to the camera movement because I thought that would be easier and look better than tracking. But after several days of fruitless struggle with the camera drift, I gave up and had them walking in place. I got cheeky with a walk cycle of He-Man and had him waggle his hips like Wonder Woman because I thought he'd be so far back in the crowd no one would notice...but then he ended up being front and center. And there are so many walk cycles a with a frame or two shaved off- I should have checked them before the final renders were comped. And when time was bearing down on us, I relied so heavily on the cut-and-paste cheats for some characters that I won't even name which ones they are because I'm embarrassed. You may notice that my usually meticulous tagging of characters is lacking in this video, but I just couldn't muster the energy to follow such intricate camerawork and tag animation I didn't care to take credit for. But I am proud of a few things. As stupid as I was about my Batman and Robin camera drift attempt, I am very relieved that shot turned out so decent. I might even use it for my demo reel. And at my insistence, I got to place Velma and Johnny Bravo in a scene together (in the building outside dog alley, where Johnny draws the shades.) I'm reasonably proud of my Daffy Duck because I think its good animation done very quickly. Overall, I have to say this was a fabulous learning experience and for all my errors, I am pleased with the product. The artists at Artifact really pulled this one together- it was a great team to be a part of. And animating classic character is a real, if rare, treat.
Posted by Joanna Davidovich at 4:25 PM 2 comments: 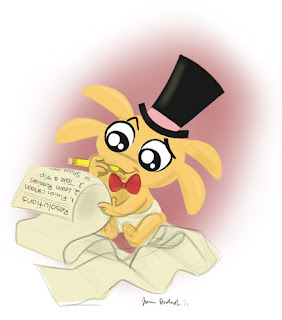 I haven't had time to make a proper holiday card this year, but at least I got to squeeze out one sketch this past week.
Posted by Joanna Davidovich at 2:37 PM No comments: