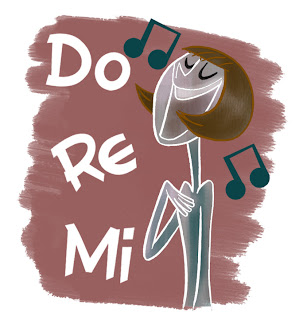 Jackie Theater Workshop presents "Improv: The Musical!" this Saturday as part of the 8:00pm show. I'll be in the cast helping to create the first and only performance of an original musical inspired by an audience suggestion. Possible tagline: "How OFF can Broadway get?" (Good, eh?)
Posted by Joanna Davidovich at 10:39 PM No comments:


It's here! My demo reel for 2011. There was more I wanted to put in than was willing to take out, so as a result, I have used the entire length of my demo reel song "Mini Skirt." I love that song, and it just suited my needs so perfectly I never had the heart to replace it. But alas, I think this might be my last year using it. All good things must end. I at least have a whole year to find another song that speaks to me.
Posted by Joanna Davidovich at 4:33 PM 7 comments: 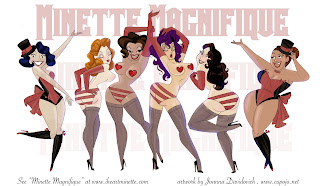 There's a young burlesque troupe in Atlanta that's lots of fun called Minette Magnifique. Whereas many troupes use the word "burlesque" as a tasteful euphemism for plain ol' stripping, Minette really hearkens back to a vintage pin-up girl classy/cute kind of striptease, with comic sketches in between. On a related note, it now my goal in life to create a comedy sketch for every Ruth Wallis song ever recorded. Also, the girls are fun to draw.
Posted by Joanna Davidovich at 11:42 PM 4 comments:

Why Is Monkey Rag Taking So Long?

So, its been a while. Monkey Rag hangs over my head like the sword of Damocles. I refuse to accept the perpetual work-in-progress, but there's no denying its taking longer than I ever imagined. Finding the time has been a challenge with all the normal demands of work, home, and family. But its also that since its my own project, I want it to be a representation of my best work. So when I'm unsatisfied with some animation, I tend to rework it instead of moving on. For example, my Little Raccoon walk cycle. I did this three months ago:

It was not what I wanted, but it was done. I have a couple days off this week, so I decided to Monkey Rag it up a bit, but I just couldn't stomach that old cycle. So yesterday I animated this:

Its still not what I envisioned, but its a lot closer. I'm still struggling on whether the best approach is to rework until satisfied, or to steam roll ahead and get this puppy finished. We'll see.
Posted by Joanna Davidovich at 10:13 AM 2 comments:

"The Illusionist" : There Are Magicians 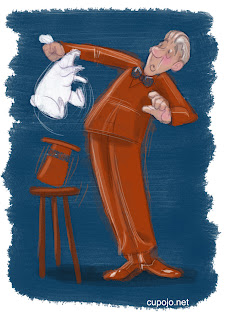 I watched this movie on the verge of tears almost the entire way through. Melancholy, sweet, quiet, beautiful. Chomet was already my hero with "Triplettes of Bellville", but now he's become godlike. Yes, if I ever switch careers and become an atronomer, the first planet I discover will be named "Chomet." I don't want to speak too much about this film, except to urge you to make the effort to go and see it. Support it. Hug it. Send it flowers and love letters. If you'll excuse me, I have to go and finish watching the live action Tati in "Mon Uncle". (Hooray for Netflix streaming!) 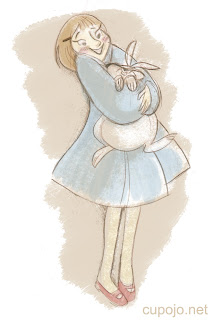 Posted by Joanna Davidovich at 11:34 PM No comments:

So last night I posted the final movie of the BlueBird commercial that I've been yakking about for months. I reiterate, it is not epic, but I am proud. It was the first time I was given all character design and animation responsibilities on a commercial spot, and I turned it around in six weeks. I want to go over my process in this venture just in case it might help somebody, and also because I want to improve my methods.

When Artifact brought me on board for this project, it was a wish/nightmare come true. It was a few days before the live action was shot, so I spent the time designing the characters and getting feedback on them. I also animated the butterfly cycle since I knew it could just be dropped in anywhere in the comp. Once I got the live action edit, I made up a shot list and my plan for the character population in each shot. The client wanted as many characters as possible, so my attack plan included a lot of cloning, cycling, recycling, and whatever cheats other cheats I could think up. (At this point I should mention that I worked from my home studio,

since working with my own equipment would be faster. Artifact is equipped with Cintiqs, but I really wanted to work on paper for this spot. I animate with more ease on paper, and my Brother scanner made it a breeze to digitize my files for inking.)

I submitted pencil tests (first keys, then full) for approval, and made rough comps in After Effects to give an idea of how the characters would fit in the scene. Once Artifact and the client both approved my animation, I scanned the scenes with my Brother scanner (have I mentioned yet how much I love it?) and sequenced the cels in After Effects. The idea was that I would leave as little guesswork as possible down the pipeline. I delivered the cels in Photoshop files for easy inking on those lovely Cintiqs, and the After Effects files had all the timing keyed out and ready to be replaced with the final colored psd files.

I had also delivered at some point previously sample inks and color models for the inkers and painters...See this is why I need to write this all down- I've already forgotten the order in which I did things!

There were changes here and there, but for the most part the studio and the client were very easy to work with and never asked for anything outrageous (like changing the species of a character halfway through). I would say that my biggest mistakes were made after I was ostensibly finished with the project. I just have to say this now: no one will ever care about your work as much as you do, and no one's eye will be as trained and critical as yours. Once I delivered all the .movs, .psds, and .aeps,

I gave myself a pat on the back and moved on to a different project. I didn't check in. I didn't follow up. So when I saw about a month later the client-approved movie with glaring errors (to me at least), I glumly spent that night writing a meticulous, nitpickingly-boring laundry list of things that needed to be fixed, along with some new comp visual aids. Happily, the team did address the major issues, but it would have been better for everyone if I had just stuck my nose in the door once or twice to check in. Again, I am happy with the final product, and I am armed with new knowledge about how to pull off this kind of work. I hope I get another shot at something like this soon. I think I'm ready for it.
Posted by Joanna Davidovich at 9:54 PM 4 comments: 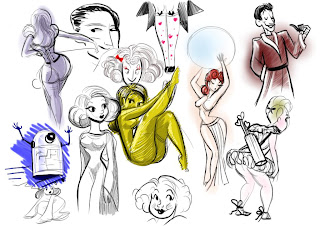 Had some downtime at work, so I decided to mess in SketchBook. By the way, I adore SketchBook. Here are some doodles inspired by local burlesque troupe Minette Magnifiqe...and Star Wars.. (?)
Posted by Joanna Davidovich at 5:24 PM 1 comment:


Here it is! My very first commercial in charge of all the character design and animation. Not a masterpeice, but I'm still happy with it. I'd like to talk about it at length, but this took a while to encode and its late. Curse my sleepy head!
Posted by Joanna Davidovich at 12:00 AM 2 comments: 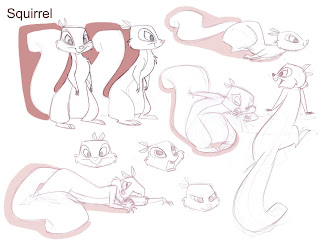 I got the final BlueBird movie! I'll hopefully be able to post it tomorrow evening. Here's a squirrel until then.
Posted by Joanna Davidovich at 12:38 AM No comments: 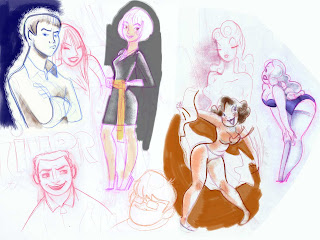 At some point I have to stop trying to get a great drawing and go to bed.
Posted by Joanna Davidovich at 10:43 PM 3 comments: 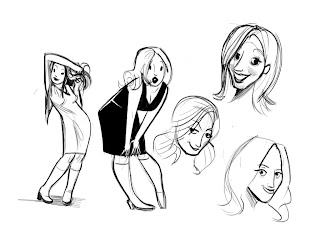 Posted by Joanna Davidovich at 5:29 PM No comments: 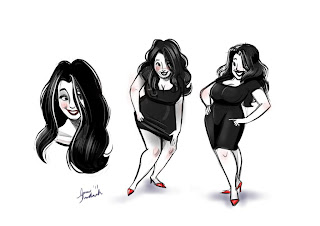 Posted by Joanna Davidovich at 12:45 PM No comments: 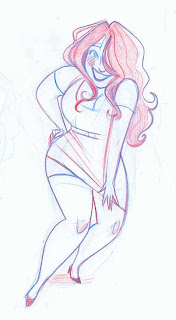 We had photos taken in my improv troupe, and there were a lot of great poses. I'm sketching out some to whip myself back into drawrin' shape.
Posted by Joanna Davidovich at 12:14 AM No comments:

Warming up mah drawrin' hand...
Posted by Joanna Davidovich at 11:54 PM No comments:


Hooray! I finally got the ok to post some of the La'antz and Derek cartoons I worked on back in 2009. (Yikes, its been a while!) As you can see, this is pretty different from what I normally do, but these guys did grow on me. Please enjoy this montage, with a weirdly appropriate sound track by Bonzo Dog Band.
Posted by Joanna Davidovich at 9:34 PM 1 comment: 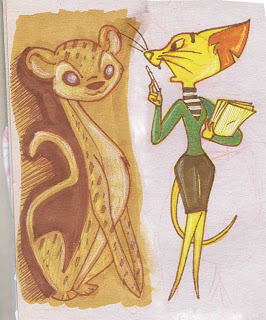 I took a break from compiling materials for my demo reel update and found these old doodles from the crapbook.
Posted by Joanna Davidovich at 7:12 PM No comments: 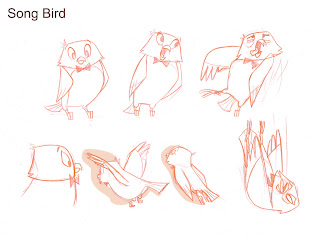 As I spent most of my evening organizing my workspace, I'm posting some more "BlueBird" character designs. This little guy is one of a clone trio called "Songbirds". I went wild naming these guys, huh?
Posted by Joanna Davidovich at 11:42 PM No comments: