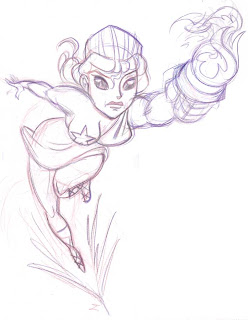 Posted by Joanna Davidovich at 12:08 AM 2 comments: 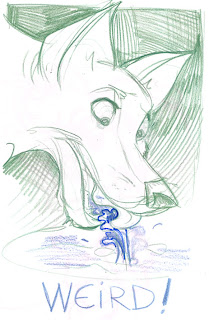 You know that feeling of wonder and awe you felt when you first discovered those remarkable Muybridge photographs? Those step-by-step explorations of simple motions in humans and animals revealed subtleties that were up until that point unnoticeable. Those pictures are fascinating to anyone who never knew that horses fly, but particularly so to animators. Animation is, after all, a study of motion.

I've just finished watching a show on Discovery called "Time Warp" and I'm thrilled to announce that it is Muybridge 2.0, Muybridge To The Max, Muybridge On Acid, MUYBRIDGE XTREME!!! The concept of the show is simple: take common actions and film them at 3,000 to 10,000 frames per second. And the results are astonishing. A man gets punched in the abdomen and his body becomes liquid- with tremors rippling in all directions from the point of impact. As his head snaps back from a clock to the jaw, his nose literally gets left behind. A balloon is popped with a pin and reveals a second smaller balloon inside and then that pops too (I still have no idea how that's possible or what that means, but its friggendy cool.) Did you know that a dog laps up water not by curling his tongue forward and making in a little tongue-bowl, but by curling his tongue backward and tossing the water in his mouth? WEIRD!

So to all you animators and everyone interested in the poetry of motion, you must make a weekly date with this show and goggle. I know I'll be adding it to my reference library the 3,000th of a second it comes out on DVD.
Posted by Joanna Davidovich at 11:56 PM 2 comments:

I've stumbled across something remarkable on this electronic manna known as "the internet". In an innocuous archive, there is a treasure trove of episodes from a mid-century radio program called "X Minus One". This is a fantastic science fiction show that I just cannot get enough of. Most of the episodes are adapted from a publication called "Galaxy", and it includes stories by Ray Bradbury, Isaac Asimov and a bevy of other trailblazing authors. The tone of the show reminds me a lot of the Rod Serling "Twilight Zone", with stories ranging from tongue-in-cheek funny, to soul-trappingly horrifying. There are of course, a few clunkers (the one about a blinded spaceship worker who sings in spaceports was a bit blah) but the better part of the series is awesome. My favorites so far are "The Cave of Night", "Skulking Permit", and "A Thousand Dollars A Plate" . Go check 'em out!


Now, for those who have never bothered with old-time radio (or OTR, as the cool kids say) this is an entertainment experience that nothing today can compare with. There such an intimacy with radio- even after half a century these programs seem spontaneous and personal. I really recommend you give them a chance.
Posted by Joanna Davidovich at 11:51 PM No comments: